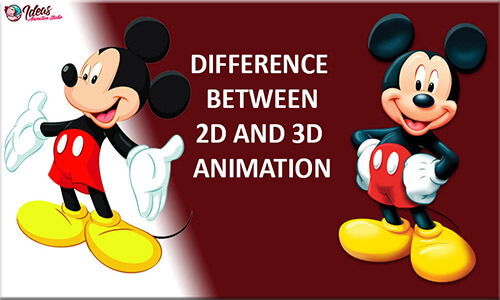 A majority of us grew up watching Tom and Jerry, Mickey Mouse, and Donald Duck. These are the kind of animations that gave us a blood rush whenever we missed watching, they are still hilarious and famous up to today because of their funny characters and scintillating scenes.

These animations were part of the old generation 2D animations that inspired many kids to pursue animation as a career.

The current market of shows has transitioned due to Technological advancements to 3D which is being used frequently and adopted for many uses.

Definition of 2D and 3D Animation

A 2D animation is a form of animation where one drawing is followed by another which has been modified a little bit to express a different pose or subsequent action at 24frames per second(24fps).

This kind of drawing creates movement in a two-dimensional space.  The objects worked in this way include characters, FXs, creatures, and backgrounds. 2D animation has existed since the 1800s and has evolved to more complex characters performing complex actions.

The first 2D animation ever made was called Fantasmagorie, a short cartoon made by Emile Cohl and was released in 1908. Then 20 years later Steamboat Willie was released and that is when Mickey Mouse was first featured; this gave the rise to the ‘Golden Age’ era of animation studios and entertaining animations.

The 2D animations to many may seem old but it still holds a special place in the animation industry and that has made it survive all this time and still be relevant to date. Like in the recent times we have witnessed the combination of 2D and 3D in movies like a 3D bauble that glows was used in Disney’s The Black Cauldron, the 3D robot used in Warner Bros’ the Iron Giant which is entirely a 2D movie.

The current technological advancements have favored 2Ds integration with 3D and its application in various platforms today, it does have have its pros and cons which make it to be less demanded and they are:

Unlike in the past where the majority of the work was done manually, nowadays there are good software in the market which are being used to make 2D animations.

Some of 2d and 3d animation software includes; Synfig, Opentoonz, Maefloresta and Pencil 2D which are free.

These technological advancements have turned the fortunes around for the 2D animation industry and it’s being adopted for adverts, teaching, and explainer videos. This is because currently, companies are starting to invest heavily in 2D as it is becoming multipurpose.

As per the market figures, 2D animation will retain its visibility as Netflix plans to invest over $5 billion into animation, and many platforms like Facebook, Snapchat, YouTube and many others are all coming up with a focus on 2D animation.

The technological advancements being witnessed are a clear sign that 2D will remain to be the foundation of all animations, and the line between 2D and 3D will be blurred very soon.

On the other hand, 3D is defined as the use of motion to give life to objects and characters in a three-dimensional space and they have height, width, and depth.

The objects can be manipulated in any way just like one can handle real-life objects. 3D has evolved from the use of the Stop-motion/Claymation technique to modeling objects in the computer (C.G.I).

Though highly favored in the current times 3D animation does have its Pros and cons that make it less adopted by many upcoming animators and they are:

Whether you are starting up from scratch or as a beginner in animation, there are a lot of software available in the market today for 3D animation which are both online/free and paid for.

The introduction of Augmented and Virtual reality is proving that 3D animation’s application in the future will continue to grow and dominate the market share.

The advancements have made interactions possible by the way of making avatars in games and learning in a virtual class. Thereby, 3D animation will continue being an area of great interest as it opens the doors to unimaginable creativity

Differences between 2D and 3D animation

The following are distinctive differences that will help upcoming animators and animation enthusiasts to fully understand them better.

From the information provided above, it is clear that 2D and 3D are reinventing themselves for the current animation environment and market need. Thereby making it hard for one to fully give a verdict on which one is better or good for use on different projects. This though does not shadow the fact that 3D has the superior market share and favorability among creators and it is the best. But before choosing, it is good to analyze your audience’s needs and preferences.